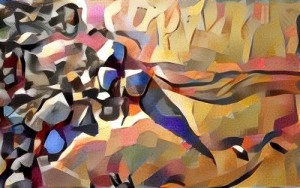 Marie lived with him for years.  Sometimes he would get angry and lash out, but it was only occasional.  The yelling wasn’t too bad.  And the bruises and scars would heal up.  The worst part was the embarrassment when her friends would ask about him.  She would deny his abuse every time, even if it didn’t make sense, like when a handprint showed up on her face.

It was different when their daughter was old enough to be his target.  Three years old.  Marie would defend her, even pick Rose up at times to prevent him from harming her.  Marie warned him.  She told him that if he put a hand on her, then she would leave him.  He finally did.  So she left.  She wouldn’t allow her daughter to be exposed to the trauma that she endured.  Yes, now she saw it as trauma.  She felt the fear that she had never felt for herself.  So she walked out.

She knew better than to call his family for support.  In their eyes, Jack was perfect, a wonderful son.  So she called her mother.  “Marie, you need to submit to your husband,” she was told.  She called some friends.  “Don’t you have some money set aside?”  “I’m sorry, but we don’t have any place here.”  She called the Women’s Crisis Line, and was told that there was a waiting list for all the domestic violence shelters.  Probably the soonest she could get in is in three months.  She had nowhere to go.

After two days on the street, she contacted a social worker with Adult and Family Services.  He was skeptical about her story, but agreed to give her a motel room for a week.  After six days, she has contacted everyone she knows, everyone in the book they gave her.  She called a service network, but the lines are always busy.  She has one more night.

The one cause of homelessness, for every person who ends up on the street, is a lack of a support network.  Many people lose their housing because they lost their jobs or other reasons, but they don’t become homeless.  That’s because they have family or friends who support them enough to give them a place to stay until they can get on their feet.  Most people who have severe mental illness don’t become homeless, because there is a foster care system, and because many family members care for their own.

There are a few homeless who are on the street because their criminal behavior make it impossible for them to live with.  But the majority of homeless are there because they have no one to turn to, no one to give them a place to live, even for a while.   This is the only real cause of homelessness.