This is a guest post by Nigel Branken, who, with his family, ministers to the poor in South Africa.  He speaks out against the continuing prejudice against the coloreds in that country, and lives out his convictions by assisting people and helping them through the courts.

Nigel offers us some great wisdom: 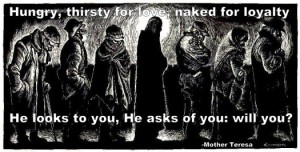 While all of the above, education, hard work, entrepreneurship, job creation and economic growth are all good and help in some way, these arguments ignore and sustain the main reasons we have such obscene levels of poverty namely the greed of the ultra rich, their success being dependent on an exploitable work force, together with all of our combined apathy and acceptance of the status quo.

Not having an education is used as a justification to exploit people and pay them less than what is required to live with any dignity. “If they were more educated they would be paid higher wages” is just another way of saying “I have employed you because I can get you at a super cheap price and make massive profits from you.”

The hardest working people I know are the poorest. They work long hours for 6/7 days a week while never being able to afford a holiday. Their companies strictly control and limit their lunch and tea breaks. They are kept at maximum production levels on the brink of exhaustion for as long as they can be productive and are often churned out and replaced as soon as their productiveness ceases to be helpful.

Growth in the economy hardly ever translates into a reduction in poverty as most new wealth goes to the already rich. This is why inequality globally is growing not shrinking. The ultra rich keep taking more and using that more to demand more from the poor. Job creation programmes which pay minimum wages hardly ever translate into a real reduction in poverty. Entrepreneurship, despite being spoken of as a solution is also not encouraged in reality. The rich do not really want the poor to start their own businesses. Limited access to capital and excessive regulations at the entry level normally provide sufficient barriers to entry so the majority are kept without an escape route from poverty, thereby maintaining an available exploitable work force for the ultra rich.

If you look at the ultra rich, it is hardly ever their hard work, education or the growth of the economy that has led to their riches. Their riches are normally built on the backs of the poor. They are dependent on the poor. In addition, the rules are stacked in their favor and there is also a combination of luck, opportunity, and connectedness.

Perhaps the most revealing reason these arguments are used is because they require nothing or very little from the ultra rich. The responsibility for poverty is placed in the hands of government or the exploited themselves.

When you suggest that perhaps there could be a little more even distribution of profits you are labelled a communist, a socialist, a leftie or a liberal. You are told that only free market capitalism works despite the fact that there is very little freedom in the markets. The rules favor those who have already made it.

No current political party will be able to deliver the change we need. Most political parties have already been captured by the ultra wealthy. Our governments have already mostly been bough and act in the interests of a few. We are already mostly oligarchies. The change which is required will take a grassroots movement of active citizens who are not only fed up with the status quo, but also prepared to work for change.

If we are going to move towards a more just world, we need to dream while we are awake and actively pursue our dream by demonstrating it is possible around us and advocating for structural change.

“We are a rather ordinary family doing some extraordinary things. We believe as Christians that God is extremely concerned with the brokenness in our city and nation and that He has called each one of us to get involved in making a difference. To bring change, we need to see the future, prepare for the future and then become the future… or in the words of Ghandi “we must become the change we want to see in the world”.

We want to see a world in which the rich do not tolerate extreme poverty and inequality. We want to see many people actually laying down their lives of comfort and convenience for the sake of bettering the lives of others. Seeing people freed from poverty, inequality, racism and exploitation is more important than fulfilling our lust for more things! We want to be part of a society in which people are valued more than things. We want to see the god of consumerism in South Africa bowing it’s knee to a love motivated revolution which results in freedom from oppression and exploitation. We want to see this for all people, regardless of class, citizenship, race or religion.

We are going to live our dream and see this reality briefly described above happening around us. We hope others will join us and this will happen around them too. Who knows, very soon, the world can be a different place!