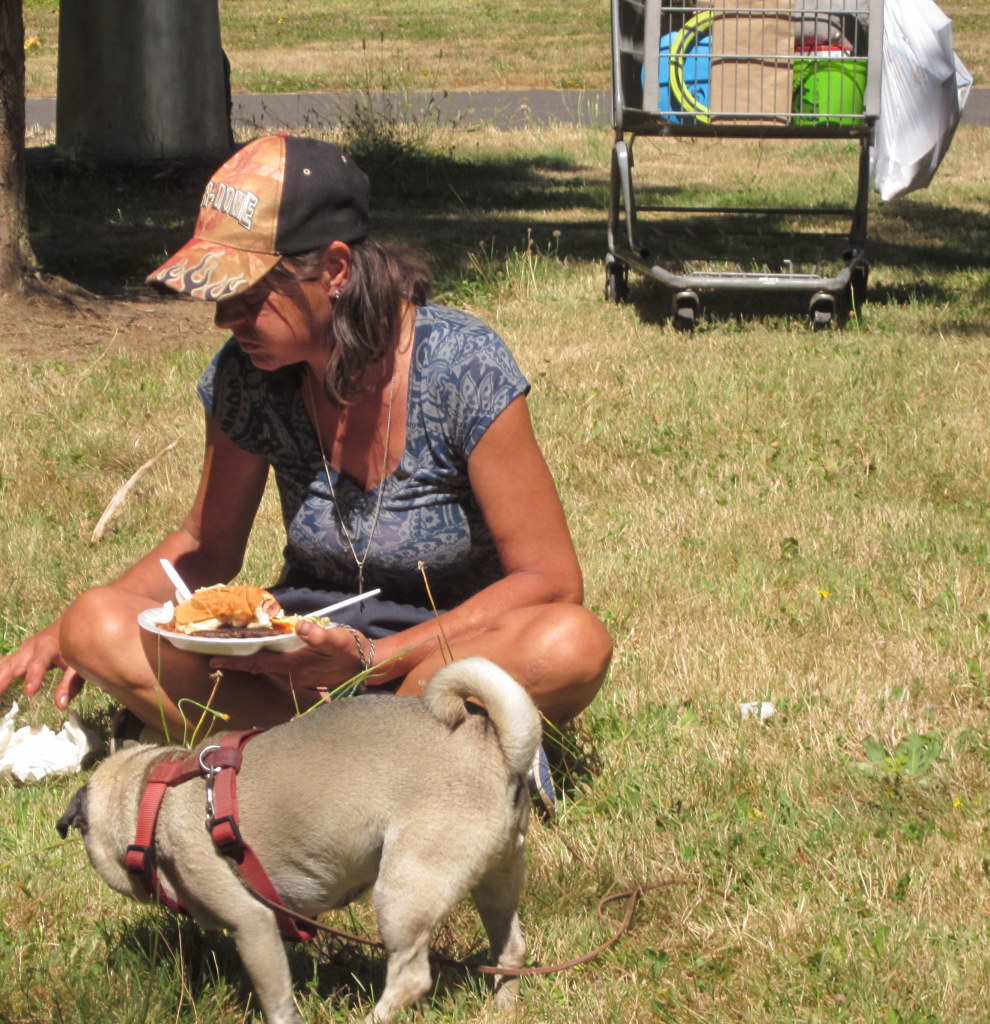 Kristen Everett is a street outreach worker in Cambridge, Mass for a shelter named Caspar.  Perhaps you didn’t know there were homeless in the center of our prime education real estate, but no matter how cold it gets there, there are always people in need.

Kristen posts snippets of her daily experience on the streets on Facebook and I thought I would share some because they offer insight on what it means to work with those who face death daily.

I was sitting in church today, running though all the names of both my street and church folk. Since they are about the same age, i pictured the groups switching places. What would it take? How many thin lines to cross?

A guy panhandling in Harvard today kept yelling and pointing to his blanket, ‘Sir, look at me! look at me! that is my bed, look at me!’ When he caught my eye, I said, ‘Oh, i see you!’ He cracked up and said, ‘God bless your heart, thank you for seeing me.’

Discussed Camus and Sartre with a train-hopping girl today. I love my job.

Walking to my car behind the shelter, I hear the guys living in the woods call out ‘Goodnight!’ I call back and wave toward the darkness.

When able-bodied 22 year-olds live in doorways, we conclude that these kids just choose to party and be irresponsible. When we stop to listen, we realize that missing families are just as crippling as missing limbs.

‘Wow, you’re the 1st person to notice us all day. I was beginning to think it was the matrix.’ – a young couple spanging in a doorway

Big John died early this morning on a bench in front of CVS. Yesterday when i asked if he was having a good day, he said ‘Whether it’s a good day or a bad day it’s still a day.’ We didn’t know it was his last. I will miss his face.  And then there was a parade of butterflies and pretended it was all in John’s honor.

Yesterday I gave a girl The Little Prince, and tonight she declared that she read it, so I gave her some Salinger. when i walked by an hour later, she was stretched out in a doorway, intently reading by dingy streetlight.

Sat in a doorway tonight with a man who is missing his leg and four fingers because of in-utero alcohol exposure. He is now 33, homeless, and addicted. Lord have mercy.

Talked with a sweet girl tonight who with glassy eyes assured me she is doing ok sleeping outside. Meanwhile her lethargic beagle puppy huddled under the blanket told a different story.

An older homeless man told me that a fringe benefit of my job is that I’ll know some good spots to sleep if I’m ever in a bind. Ha.

After screaming at 2 guys that they stole her pint, threatening them with a walking stick, and swearing that she would slice them, she came over to show her new buck knife. I mentioned that if she does slice them, I’ll have to visit her in a different place. She cackled, ‘Would you really visit me?’ She walked off laughing heartily at the ‘joke’. 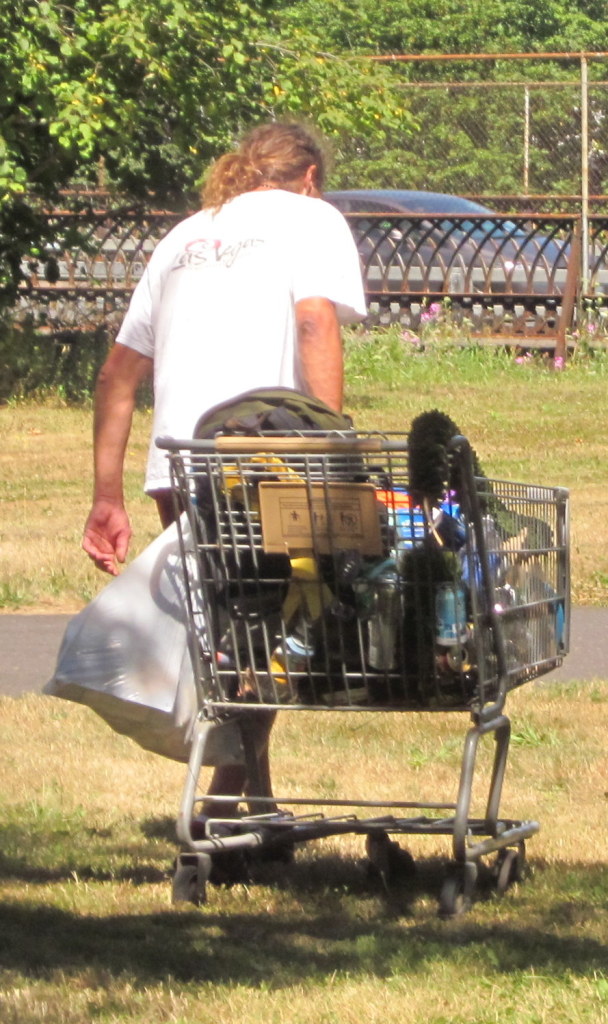 As I walked to my car in the lot, I saw John with his cart, his layered coats, and multi-hatted head. I tried to say bye quick and jump in my car, but John is so lonely that he can never let you go. After rolling down the window to say bye again, he was still calling after me as I drove out, ‘Stay safe! Be good, honey!’

A guy in central told me that I am in a burn-out job. I tried to disagree, but he said, ‘Honey, I’m a retired street-walker. I know a burn-out job when i see one.”

We drove a man who had one arm and tracheotomy to a shelter tonight. No tube, just a hole in his throat. He waved his papers at me, his eyes pleading with me to care enough to understand his urgent puffs of word-breaths.

Gave my tea away to a young schizophrenic whom I’ve been trying to meet. When i held out my hand and told him my name, he started fuming and shouted ‘it’s not fair! that’s a f-ing bullshit name!!’ I’ll try again next week.

A guy showed me pictures on his phone his teenage daughter and said that she is finally trusting him again after he disappeared into prison for 7 years of her childhood.

When i stop to talk to John, his cart blocks the sidewalk. Raymond, reeking of urine, stands next to him. They are on their way to the liquor store. John runs his finger over his eyebrow and mumbles something about a fall. ‘That’s a zygomatic arch!’ announces Raymond. ‘The eye socket!’ I remember that Raymond has told me he has a degree in biology.

Where else but in an AA meeting can a woman admit to a group of 100 strangers that she thinks she might be an alcoholic, that her ex-boyfriend broke into her house and threatened to kill her, and that she tried to kill herself last week. All the women in the meeting immediately made a list with all their names and numbers to give to her. Everyone applauded when she came up to get her first chip. Lord, have mercy.

Three times today I passed a blanketed shape in a doorway. I called to the shape. No answer. I never poke at anyone or pry back a blanket, so I hoped the person was alive and sleeping and moved on. Five hours later, I shouted to the shape that I would call an ambulance if it didn’t respond. I nudged the feet. there were no feet. The blanket was hollow. People had put money in the shape’s cup and church people had left the shape two sandwiches and a tarp.

Jan 3
Today I met a guy I’ve been afraid of meeting since this summer because of the violent and psychotic stories I’ve heard. I introduced myself and ten minutes in I guessed who he was. He was mostly very lonely and wanted to show me all his razors, matches, toothbrushes, and bottles that live in his many-pocketed overcoat. Victory!

One guy all the way to the shelter kept repeating, ‘Anyone who hurts you girls hurts me, and that is not a good idea. I will not back off. Boo-ya.’Ii did not feel comforted by these obsessive assurances. At all.

I am overwhelmed by the depth of untreated mental illness I spent time with today.

Franny: You walk the streets; you should carry a gun!

Me: Nah, but you can say prayers for me.

Franny: I do everyday.

‘When i was little, i’d see all those street people talking to themselves…but now I know why they do.’